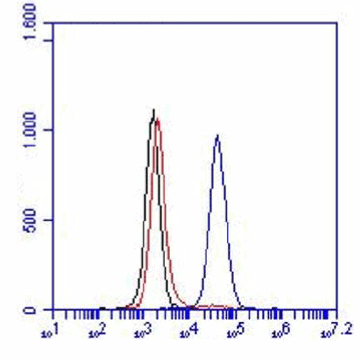 The monoclonal antibody 80M2 recognizes the extracellular part of- membrane-bound TNF-RII as well as- the soluble form of TNF-RII which is generated by proteolytic cleavage of the extracellular domain. The soluble form can still bind TNF-alpha with high affinity and functions as a TNF-alpha antagonist.- TNF-alpha is an important signaling protein in the immune system which can activate inflammatory responses, induce apoptosis, regulate cellular proliferation, and may even promote cancer progression. TNF-alpha can bind to two structurally distinct membrane receptors, TNF-RI and TNF-RII, which have both distinct and overlapping downstream signaling cascades. TNFRI is believed to be expressed on nearly all cell types, whereas TNFRII exhibits more restricted expression, being found on certain subpopulations of immune cells and several other cell types. A dominant role of TNF-RII has been shown in thymocyte activation by TNF-alpha, whereas induction of cytotoxicity and other functions are mediated largely by TNF-RI. TNF-RI is equally well activated by both the 17 kDa soluble and 26 kDa membrane-bound form, whereas TNF-RII is activated only by the membrane bound form of TNF-alpha. The antibody is a non-agonistic receptor modulating antibody. It enhances in vitro TNF alpha responses by increasing the affinity of the soluble form of TNF-alpha for TNF-RII.

Application
Flow cytometry, Functional studies, Immuno assays, Immuno fluorescence, Immuno precipitation
Application Notes
FC: Antibody 80M2 was used to select HeLa cells expressing TNF-RII- by- FACS. As negative control mock transfected HeLa cells were used. (Ref.2)
FS: Antibody 80M2 functions as an allosteric modulator, which stabilizes the ligand-receptor complex. (Ref.1)
Use
Dilutions to be used depend on detection system applied. It is recommended that users test the reagent and determine their own optimal dilutions. The typical starting working dilution is 1:50.
Positive Control
HeLa cells- transfected with TNF-RII
Negative Control
Mock transfected HeLa cells
Product type
Monoclonal antibodies
Quantity
50 µg
Formulation
0.5 ml (100 μg/ml) 0.2 μm filtered protein G purified biotinylated antibody solution in PBS, containing 0.1% bovine serum albumin and 0.02% sodium azide.
Conjugate
Biotin
Isotype
Mouse IgG1
Species
Human
Cross reactivity
Rat – Yes
Alias
Tumor necrosis factor receptor superfamily member 1B, Tumor necrosis factor receptor 2, CD120b, TNF-R2, p75, p80, Tumor necrosis factor receptor type II, TNF-alpha receptor<br> - Gene name: TNFRSF1B, TNFBR, TNFR2
Storage and stability
Product should be stored at 4 °C. Under recommended storage conditions, product is stable for at least one year.
Precautions
For research use only. Not for use in or on humans or animals or for diagnostics. It is the responsibility of the user to comply with all local/state and federal rules in the use of this product. Hycult Biotech is not responsible for any patent infringements that might result from the use or derivation of this product.
Disease
Autoimmunity, Gastroenterology
Protocol