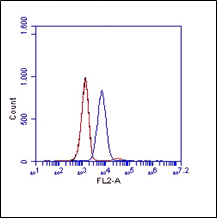 The monoclonal antibody 5B8 reacts with mouse osteoclast-associated receptor (OSCAR), which is a 265 amino acid type 1 transmembrane protein belonging to the leukocyte receptor complex protein family that play critical roles in the regulation of both innate and adaptive immune responses. In mice, OSCAR is a RANKL-inducible gene which- is expressed during the later stages of pre-osteoclast maturation and is shown to be a potent FcR&gamma;-associated costimulatory receptor in vitro. OSCAR promotes osteoclastogenesis in vivo, and OSCAR binding to its collagen ligand led to signaling that- is involved in functional differentiation of leukocytes. In recent studies human OSCAR has been shown to play multiple roles in the immune system including activation and maturation of immune cells, prevention of apoptosis and enhancement of pro-inflammatory circuits. The latter by- inducing intracellular calcium release resulting in sustained IL-8 and chemokine expression leading to chemotaxis of Th2 effector and regulatory T-cells. In a- murine model using calvarias bone explants, the synovial fluid of osteoarthritis patients resulted in increased OSCAR mRNA expression suggesting that OSCAR might contribute to in the degenerative process. Moreover, in a recent study- OSCAR was found to be- induced in monocytes of RA patients, facilitating their differentiation into osteoclasts and bone resorption. The monoclonal antibody, 5B8, can be used for analysis of mouse OSCAR in flow-cytometry as well as functional studies for osteoclastogenesis.

Application
Flow cytometry, Functional studies
Use
For flow cytometry and Immuno fluorescence, dilutions to be used depend on detection system applied. It is recommended that users test the reagent and determine their own optimal dilutions. The typical starting working dilution is 1:50. For functional studies, in vitro dilutions have to be optimized in user’s experimental setting.
Product type
Monoclonal antibodies
Quantity
20 µg, 100 µg
Formulation
0.2 ml (100 µg/ml) 0.2 µm filtered antibody solution in PBS, containing 0.1% bovine serum albumin.
Isotype
Rat IgG2b
Species
Mouse
Storage and stability
Product should be stored at 4 °C. Under recommended storage conditions, product is stable for at least one year. The exact expiry date is indicated on the label.
Precautions
For research use only. Not for use in or on humans or animals or for diagnostics. It is the responsibility of the user to comply with all local/state and federal rules in the use of this product. Hycult Biotech is not responsible for any patent infringements that might result from the use or derivation of this product.
Disease
Autoimmunity, Tumor immunology
Protocol