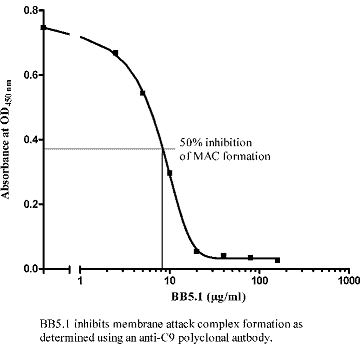 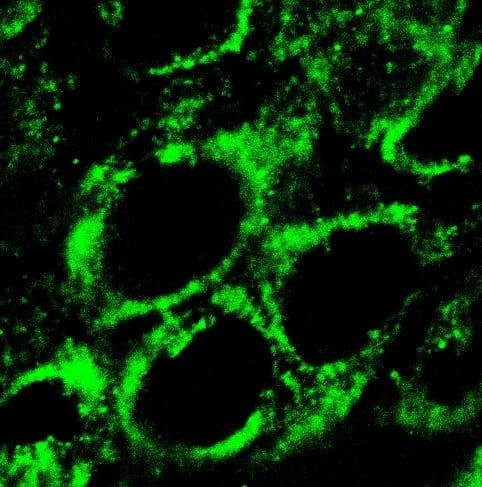 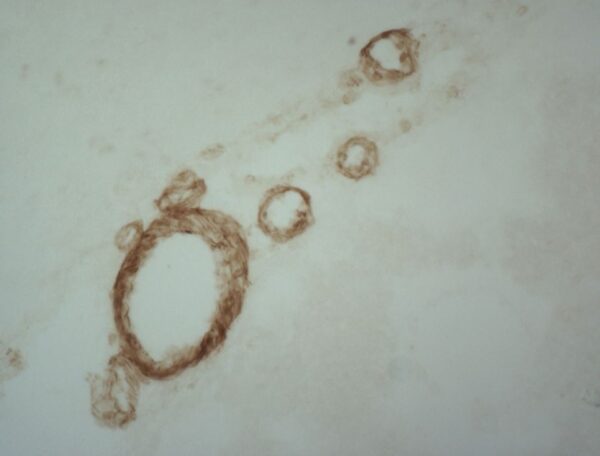 The monoclonal antibody BB5.1 binds the fifth component of mouse complement (C5). The complement system is a group of plasma and cell membrane proteins that play a key role in the immune system. All three pathways (classical, alternative &amp; lectin) lead to the cleavage of C3 and eventually the formation of the cytolytic membrane attack complex C5b-9. If the activation cascade is allowed to proceed beyond the cleaving of C3 into C3a and C3b, an additional C3b molecule binds to the C3 convertases. This generates the C5 convertase (C3bBbC3b for the alternative pathway and C4bC2bC3b for the classical and lectin pathways). C5 convertase cleaves C5, releases the potent anaphylactic peptide C5a and generates C5b. C5b can initiate the terminal pathway , which recruits the components C6, C7, C8 and C9 to the surface of the target and inserts the C9 complex as a pore (termed the terminal complement complex) into the membrane. C5a is the most potent anaphylatoxin and a powerful chemotaxin for neutrophils and monocytes, with the ability to promote margination, extravasation, and activation of these cells. Thus, blocking C5 may be required for optimal inhibition of the inflammatory response. At the same time, inhibition of the complement cascade at C5 does not impair the generation of C3b through the classical and alternative pathways, preserving C3b-mediated opsonization of pathogenic microorganisms as well as opsonization and solubilization of immune complexes.
C5 is synthesised in the liver as a single polypeptide chain and is present in serum in a concentration of 50-80  µm/ml. Before secretion the molecule is glycosylated and secreted into plasma as a 190 kDa glycoprotein consisting of a disulphide linked alpha-chain (111 kDa) and beta-chain (75 kDa). Monoclonal antibody BB5.1 has been shown to precipitate the two chains of C5 from normal mouse serum and inhibited C5-dependent hemolysis in a functional complement test. Furthermore, BB5.1 administration completely inhibits terminal complement activity in murine models for antibody-mediated rejection (AMR) during heart and kidney transplantation. In another mouse model, both pre-treatment as well as intervention with monoclonal antibody BB5.1 attenuates disease development during anti-MPO IgG-induced glomerulonephritis. Blockage of C5 activation by BB5.1 protects against renal ischemia-reperfusion injury by inhibition of late apoptosis and inflammation. In Lupus disease, combination therapy of anti-IL-10/anti-C5 (BB5.1) can both prevent and reduce the effect of the humoral immune response

Application
Frozen sections, Functional studies, Immuno assays, Immuno fluorescence, Immuno precipitation, Paraffin sections
Application Notes
FS: ex vivo: 50 µg mAb / ml serum; in vivo: BALB/c mice 40 mg mAb/kg/day, 0-2 days followed by twice a week.
IA: Wells were coated with 2-4 µg purified BB5.1 in PBS as coat antibody for use in ELISA.
IP: Mouse serum was pre-adsorbed with αmouse-Ig affinity gel and prot-A-sepharose for 30 min at RT. Then C5 was precipitated with BB5.1 (10 µg mAb/ml followed by prot-A sepharose for 1h). Precipitated samples were analysed on 7% SDS/PAGE.
Use
Dilutions to be used depend on detection system applied. It is recommended that users test the reagent and determine their own optimal dilutions. The typical starting working dilution is 1:50.
Product type
Monoclonal antibodies
Quantity
1 mg, 5 mg, 10 mg, 50 mg, 100 mg, 20 µg, 100 µg, 500 µg
Formulation
Quantities >500 µg will be send without preservative and carrier free. Quantities <500 µg will be send with preservative and carrier. exact formulation can be found on the datasheet.
Immunogen
Purified C5
Isotype
Mouse IgG1
Species
Mouse
Cross reactivity
Rat – Yes
Alias
Complement C5, Hemolytic complement</br> - Gene name: C5
Storage and stability
Product should be stored at 4 °C. Under recommended storage conditions, product is stable for at least one year.
Precautions
For research use only. Not for use in or on humans or animals or for diagnostics. It is the responsibility of the user to comply with all local/state and federal rules in the use of this product. Hycult Biotech is not responsible for any patent infringements that might result with the use or derivation of this product.
Disease
Infectious diseases, Nephrology
CoA-TDS HM1067-HM2099