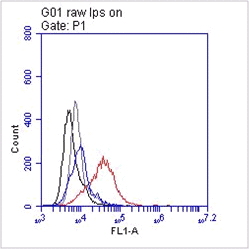 The antibody neutralizes mouse interleukin 6 (IL-6). It does not cross-react with LPS (the component of the
bacterial cell wall which is considered responsible for the toxicity of gram-negative bacteria) and TNFalpha
nor does it block human or rat IL-6 in proliferation assays using the KD83 cell line. MP5-32C11
inhibits mouse IL-6-induced proliferation of the NFS60 myelomonocytic cell line and KD83 plasmacytoma.
IL-6 is a pluripotent 20-22 kDa cytokine which plays a role in the pathophysiology of severe infection and
regulates the immune response, acute phase reaction and haematopoiesis. IL-6 plays a critical role in Bcell
differentiation to plasma cells and is a potent growth factor for plasmacytoma and myeloma.
Continuous IL-6 gene expression makes an essential contribution to a multistep oncogenesis of plasma
cell neoplasia. IL-6 is a very useful culture supplement for the generation of a high number of antibodyproducing
hybridomas.

Application
Functional studies, Immuno assays, Immuno precipitation, Western blot
Application Notes
The antibody can be used for immunochemical investigations of mouse IL-6 in structural studies and for quantitative/qualitative immunochemical detection methods. The antibody neutralizes the biological activity of mouse IL-6. Furthermore the antibody is useful for Western blot and as tracer antibody use in immuno assay procedures.
Use
For Western blotting dilutions to be used depend on detection system applied. It is recommended that users test the reagent and determine their own optimal dilutions. The typical starting working dilution is 1:10. For neutralisation of biological activity dilutions have to be made according to the amount of IL-6 to be inactivated.
Product type
Monoclonal antibodies
Quantity
20 µg, 100 µg
Formulation
0.2 ml (100 μg/ml) 0.2 μm filtered antibody solution in PBS, containing 0.1% bovine serum albumin.
Isotype
Rat IgG2a
Species
Mouse
Storage and stability
Lyophilized product should be stored at 4°C. Store stock solution in aliquots at –20°C. Repeated freeze and thaw cycles will cause loss of activity. Under recommended storage conditions, product is stable for one year.
Precautions
For research use only. Not for use in or on humans or animals or for diagnostics. It is the responsibility of the user to comply with all local/state and Federal rules in the use of this product. Hycult Biotech is not responsible for any patent infringements that might result with the use of or derivation of this product.
Disease
Autoimmunity, Tumor immunology
Protocol