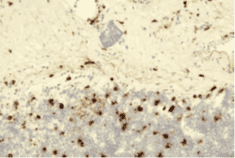 The monoclonal antibody 31 recognizes secretory leukocyte proteinase inhibitor (SLPI).
SLPI was identified as an alarm reactant and expression is induced by inflammatory factors
like LPS, IL1β, TNFα and neutrophils elastase. SLPI is a relatively small basic antiprotease
of 11.7 kDa and is a cationic non-glycosylated protein consisting of 107amino acids. SLPI
has a high affinity for the neutrophil serine proteinases, elastase and cathepsin G.
Orthologues of SLPI have been found in mice, rate, pigs and sheep. It consists of two highly
similar WAP (‘whey acid protein’)/four-disulphide core domains. SLPI contain 16 cysteine
residues which assemble into eight disulphide bridges (four in each WAP domain). SLPI is
constitutively expressed at many mucosal surfaces and is produced by a variety of epithelial
cells, including respiratory, intestinal and amniotic epithelia. Expression is also detected in
mast cells, neutrophils and macrophages. Expression of SLPI gene is significantly
increased by progesterone and by the pro-inflammatory cytokines TNF-α and IL1-β.
Although SLPI has been shown to inhibit a spectrum of proteases (including HNE,
cathepsin G, trypsin, chymotrypsin and chymase), its main action in this regard is likely to
be the inhibition of elastase, as indicated by its low dissociation constant and favourable
kinetics of inhibition for this enzyme. SLPI has been described in several body fluids like
seminal fluid, bronchial fluids, cervical fluids and saliva. It has been found to be
antibacterial, antifungal, anti-retroviral, and to have an important role in mucosal defence.
SLPI might also facilitate tumor spread, contributing to wound healing, is elevated in sepsis
and levels seem to correlate with oral candidiasis in HIV-1 positive patients. The reactivity of
the antibody 31 with isolated domains of SLPI was evaluated using domains obtained by
cleavage using partial acidic hydrolysis. Therefore, monoclonal antibody 31 recognizes also
other SLPI cleavage products.

Application
Frozen sections, Immuno assays, Immuno precipitation, Paraffin sections, Western blot
Application Notes
P: Specimen was fixed in 4% formalin for 4h. Paraffin sections (4μm) were deparifinized, rehydrated and blocked with normal serum. Optional antigen retrieval with citrate buffer. Section was incubated with 5μg/ml mAb
IA: This antibody can be used as coat and detection antibody.
F: Permeabilization was done in cold acetone with 0.5% hydrogen peroxidase for 10 min, after drying and washing, antibodies were incubated for 30 minutes.
Use
Dilutions to be used depend on detection system applied. It is recommended that users test the reagent and determine their own optimal dilutions. The typical starting working dilution is 1:50.
Product type
Monoclonal antibodies
Quantity
20 µg, 100 µg, 500 µg
Formulation
Quantities >500 µg will be send without preservative and carrier free. Quantities <500 µg will be send with preservative and carrier. exact formulation can be found on the datasheet.
Immunogen
SLPI purified from sputum
Isotype
Mouse IgG1
Species
Human
Alias
Human seminal plasma inhibitor I (HUSI-I), cervix uterine secretion inhibitor (CUSI), bronchial inhibitor (BI), antileukoprotease (ALP) and mucous proteinase inhibitor (MPI)</br> - Gene name: SLPI, WAP4, WFDC4
Storage and stability
Product should be stored at 4 °C. Under recommended storage conditions, product is stable for at least one year. The exact expiry date is indicated on the label.
Precautions
For research use only. Not for use in or on humans or animals or for diagnostics. It is the responsibility of the user to comply with all local/state and federal rules in the use of this product. Hycult Biotech is not responsible for any patent infringements that might result from the use or derivation of this product.
Disease
Infectious diseases, Pulmonology
Protocol