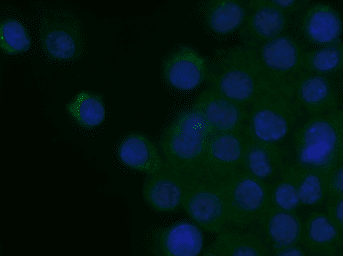 The monoclonal antibody 5G5 reacts with the Toll-like receptor 9 (TLR9, CD289). TLRs are highly conserved throughout evolution and have been implicated in the innate defence to many pathogens. In Drosophila, toll is required for the anti-fungal response, while the related 18-wheeler is involved in antibacterial defences. In mammals, TLRs identified as type I transmembrane signalling receptors with pattern recognition capabilities, have been implicated in the innate host defence to pathogens. As investigated so far all functional characterized TLR signal via the TLR/IL-1 receptor (IL-1R) pathway where recruitment of MyD88 seems to be essential. In contrast to cell-wall components, bacterial DNA is probably invisible for immune cells until DNA is liberated during processes taking place in the endosomal/lysosomal compartment where intracellular TLR9 recruits MyD88 to initiate signal transduction. Unmethylated CpG-dinucleotide-containing sequences are found much more frequently in bacterial genomes than in vertebrates genomes, whereas the frequency of CpG dinucleotides are suppressed and usually methylated. The regions adjacent to the CpG dinucleotides also affect the immunostimulatory activity. The optimal sequence differs significantly between mammalian species. Methylated CpG dinucleotides lack immunostimulatory activities. Cellular activation in response to bacterial DNA and synthetic dinucleotides containing unmethylated CpG-dinucleotides is mediated by TLR9. The monoclonal antibody 5G5 reacts with RAW macrophages and TLR9 transfected HEK293 cells, and it is cross reactive with canine TLR9.

Application
Flow cytometry, Frozen sections, Immuno assays, Paraffin sections, Western blot
Application Notes
F: 10 µm sections were fixed with acetone for 10 minutes. PBS washed sections were incubated with 5G5 1:100 in 1% BSA for 30 minutes at RT. (Ref.7)
IF: cells were fixed with 2% formalin for 15 minutes at RT and permeabilized with a mAb (4µg/400µl) containing buffer (PBS, 0.2% BSA, 0.2% saponin)- for 1 hour. (Ref.1)
FC: RAW264.7 cells were fixed for 15 minutes with 4% formalin and permeabilized (PBS, 0.5%BSA, 0,5% saponin) at RT. (Ref.1)
P: paraffin embedded tissues 5µm sections were made. After antigen retrieval (0.01mol/l, pH6 sodium citrate) and quenching of endogenous peroxidase, sections were blocked with 0.5% ovalbumin and 0.1% gelatin for 20 minutes at RT. Sections were incubated with 5G5 for 1 hour at 37 °C. (Ref.3)
W: reduced lysates were resolved by 10% SDS-PAGE and blotted on nitrocellulose. After blocking with 5% skimmed milk TLR9 was detected with 2 µg/ml 5G5. (Ref.1)
Use
For immunohistology, flow cytometry and Western blotting, dilutions to be used depend on detection system applied. It is recommended that users test the reagent and determine their own optimal dilutions. The typical starting working dilution is 1:50.
Product type
Monoclonal antibodies
Quantity
20 µg, 100 µg
Formulation
0.2 ml (100 µg/ml) 0.2 µm filtered antibody solution in PBS, containing 0.1% bovine serum albumin and 0.02% sodium azide.
Immunogen
Purified- fusion protein of extracellular domain of human TLR9 (AA 1-815) and human IgGFc
Isotype
Mouse IgG2a
Species
Mouse
Cross reactivity
Canine – Yes, Human – Yes
Alias
CD289, TLR9
Storage and stability
Product should be stored at 4°C. Under recommended storage conditions, product is stable for at least one year.
Precautions
For research use only. Not for use in or on humans or animals or for diagnostics. It is the responsibility of the user to comply with all local/state and Federal rules in the use of this product. Hycult Biotech is not responsible for any patent infringements that might result with the use of or derivation of this product.
Disease
Infectious diseases
Protocol