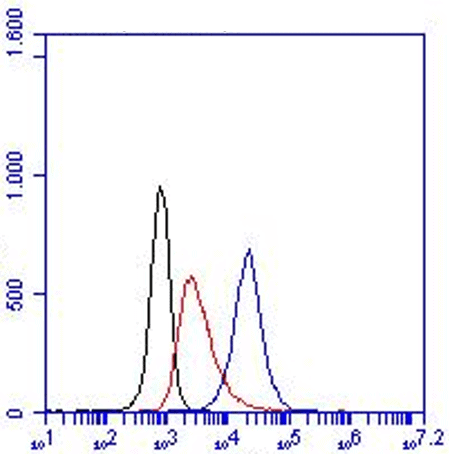 The monoclonal antibody 6E9 recognizes mouse membrane-bound as well as soluble triggering receptor expressed on myeloid cells-2 (TREM-2). TREM-2 is a 26 kDa transmembrane glycoprotein that consists of a single extracellular immunoglobulin-like domain, a transmembrane region with a charged lysine residue and a short cytoplasmic tail. It associates with DNAX-activation protein 12 (DAP12) for signaling and function. TREM-2 is expressed on immature monocyte-derived dendritic cells. After activation by microbial products or tumor necrosis factor (TNF) and TNF-related proteins, dendritic cells downregulate the expression of TREM-2. TREM-2 is also expressed by osteoclasts and microglia, where it is involved in bone modeling and brain function, respectively. Another role of TREM-2 might be promoting the removal of apoptotic cells, organic matrix and macromolecules by microglia. Defects in TREM-2 are a cause of polycystic lipomembranous osteodysplasia with sclerosing leukoencephalopathy (PLOSL), also called presenile dementia with bone cysts or Nasu-Hakola disease (NHD). TREM-2, like TREM-1, can be cleaved on the membrane to release a soluble form of TREM-2
(sTREM-2). Elevated levels of sTREM-2 in CSF of multiple sclerosis patients have been detected. This elevated level may inhibit the anti-inflammatory function of the membrane-bound receptor suggesting sTREM-2 to be a possible target for future therapies.

Application
Flow cytometry, Immuno assays, Immuno precipitation
Use
For flow cytometry, dilutions to be used depend on detection system applied. It is recommended that users test the reagent and determine their own optimal dilutions. The typical starting working dilution is 1:50.
Product type
Monoclonal antibodies
Quantity
20 µg, 100 µg
Formulation
0.2 ml (100 μg/ml) 0.2 μm filtered antibody solution in PBS, containing 0.1% bovine serum albumin and 0.02% sodium azide.
Immunogen
Mouse recombinant TREM-2 protein
Isotype
Rat IgG2b
Species
Mouse
Alias
Triggering receptor expressed on monocytes 2, TREM2
Storage and stability
Product should be stored at 4°C. Under recommended storage conditions, product is stable for one year.
Precautions
For research use only. Not for use in or on humans or animals or for diagnostics. It is the responsibility of the user to comply with all local/state and federal rules in the use of this product. Hycult Biotech is not responsible for any patent infringements that might result from the use or derivation of this product.
Disease
Neurological disorders
Protocol