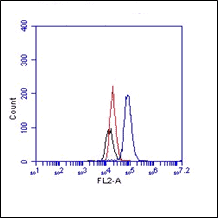 The monoclonal antibody BV9 binds to the extracellular domain (EC3-EC4) of human VE-cadherin (vascular endothelial cadherin). Endothelial cells control the passage of plasma constituents and circulating cells from blood to the underlying tissues. VE-cadherin is of vital importance for the maintenance and control of endothelial cell contacts. Mechanisms that regulate VE-cadherinmediated adhesion are important for the control of vascular permeability and leukocyte extravasation. VE-cadherin regulates various cellular processes such as cell proliferation and apoptosis and modulates vascular endothelial growth factor receptor functions. Therefore, VE-cadherin is also essential during embryonic angiogenesis. The specialized function of VE-cadherin is lost or impaired in several pathological conditions – including inflammation, sepsis, ischemia and diabetes – which leads to severe, and sometimes fatal, organ dysfunction. Furthermore, abnormal increase in vascular permeability is often observed in pathological conditions, such as tumor-induced angiogenesis, macular degeneration, allergy, and brain stroke.
Endothelial permeability is regulated in part by the dynamic opening and closure of cell-cell adherent junctions. In vascular endothelium, adherent junctions are mainly composed of VE-cadherin, an adhesive receptor that is able to self-associate at endothelial cellcell contacts. VE-cadherin links endothelial cells together by homophilic interactions mediated by its extracellular part and associates intracellularly with the actin cytoskeleton via catenins. VE-cadherin belongs to the cadherin super-family of cellcell adhesion molecules, which are encoded by more than 200 genes in the human genome. Classical cadherins are Ca2+-dependent, homophilic, cell to cell adhesion molecules expressed in nearly all cells within solid tissues. Cadherins form a core adhesion complex that consists of a cadherin dimer, binding through its extracellular region to another dimer of cadherins expressed in adjacent cells, while its intracellular region is anchored to the plasma membrane and linked to the cytoskeleton. The VE-cadherin extracellular domain consists of five cadherin-type repeats, called EC (extracellular cadherin) domains that are bound together by calcium ions in a rod-like structure.

Application
Flow cytometry, Frozen sections, Functional studies, Immuno assays, Immuno fluorescence, Immuno precipitation, Western blot
Application Notes
F: Acetone fixed sections were blocked with horse serum and incubated with antibody BV9 for 30 minutes (Ref.2).
FC: Antibody BV9 stains the extracellular domain of VE-cadherin. As negative control an IgG isotype control was used (Ref.4)
FS: Antibody BV9 functions as an antagonist. The antibody was functionally tested by adding 10-50 µg/ml antibody BV9 to cell culture. The antibody blocks VE-cadherin causing a redistribution of VE-cadherin away from intracellular junctions(Ref.5, 6).
IA: Antibody BV9 can function as coat and detector.
IF: Cells on coverslips were fixed with 3% paraformaldehyde and permeabilized with 0.5% Triton X-100 before incubation with antibody BV9 (Ref.5, 8).
W: A reduced sample treatment and 7.5% SDS-Page was used. The band size is 130-140kDa (Ref.3).
Use
Dilutions to be used depend on detection system applied. It is recommended that users test the reagent and determine their own optimal dilutions. The typical starting working dilution is 1:50.
Positive Control
HUVECs grown on coverslips
Product type
Monoclonal antibodies
Quantity
20 µg, 100 µg
Formulation
0.2 ml (100 μg/ml) 0.2 μm filtered protein G purified antibody solution in PBS, containing 0.1% bovine serum albumin. The endotoxin concentration is < 24 EU/mg, determined with HIT302 LAL Assay.
Isotype
Mouse IgG2a
Species
Human
Alias
vascular endothelial cadherin, 7B4 antigen, Cadherin-5, CD144</br> - Gene name: CDH5
Storage and stability
Product should be stored at 4 °C. Under recommended storage conditions, product is stable for one year.
Precautions
For research use only. Not for use in or on humans or animals or for diagnostics. It is the responsibility of the user to comply with all local/state and federal rules in the use of this product. Hycult Biotech is not responsible for any patent infringements that might result from the use or derivation of this product.
Disease
Cardiology and metabolism, Tumor immunology
Protocol