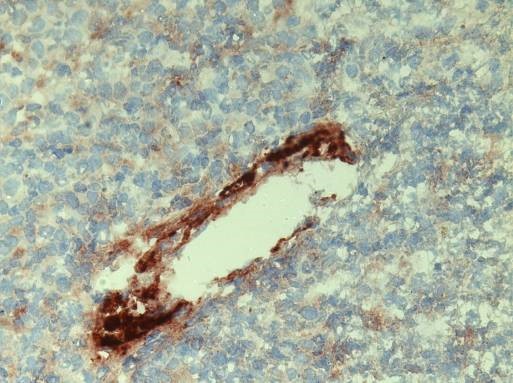 The monoclonal antibody 7H8 recognizes mouse CIq. Clq, a member of the ‘defense collagen’ family, is the first subcomponent of the Cl complex of the classical pathway of complement activation. Several functions have been assigned to the pattern recognition molecule Clq, which include antibody-dependent and independent immune functions like triggering of rapid enhanced phagocytosis resulting in efficient containment of pathogens or clearance of cellular debris, apoptotic cells and immune complexes , and is considered to be mediated by Clq receptors present on the effector cell surface. There remains some uncertainty about the identities of the receptors that mediate Clq functions. Some of the previously described Clq receptor molecules, such as gClqR and cClqR, now appear to have less of a role in Clq functions than in functions unrelated to Clq. Experiments with gene targeted homozygous Clq-deficient mice have suggested a role for Clq in modulation of the humoral immune response, and also in protection against development of autoimmunity.
The first component of complement Cl is a complex of three glycoproteins – Clq, Clr, and Cls. Cls and Clr interact to form a Cazf-dependent tetrameric proenzyme complex, C lr,-C 1 s2, which makes contacts with the Clq collagen domain. Binding of Clq to immune complexes (IgG or IgM) via the gClq domain, is considered to induce a conformational change in the collagen region of Clq, which leads to the autoactivation of Clr which, in turn, activates Cls. The activated Cl complex then cleaves components C4 and C2 in the classical complement cascade.

Application
Frozen sections, Immuno assays, Immuno fluorescence
Application Notes
F: 4% PFA fixed and sucrose infiltrated frozen tissue. 18h 4C, 0.133 ug/ml 7H8 IA: Antibody 7H8 can be used as capture and detection antibody. To detect bound C11, 1/100 diluted 7H8 was used.
Use
Dilutions to be used depend on detection system applied. It is recommended that users test the reagent and determine their own optimal dilutions. The typical starting working dilution is 1:50.
Positive Control
Macrophages, follicular dendritic cells, spleen, kidney
Product type
Monoclonal antibodies
Quantity
20 µg, 100 µg
Formulation
0.2 ml (100 μg/ml) 0.2 μm filtered protein G purified antibody solution in PBS, containing 0.1% bovine serum albumin and 0.02% sodium azide.
Immunogen
Antibody- and Clq-coated thymocytes
Isotype
Rat IgG1
Species
Mouse
Storage and stability
Product should be stored at 4°C. Under recommended storage conditions, product is stable for at least one year.
Precautions
For research use only. Not for use in or on humans or animals or for diagnostics. It is the responsibility of the user to comply with all local/state and federal rules in the use of this product. Hycult Biotech is not responsible for any patent infringements that might result from the use or derivation of this product.
Disease
Nephrology, Neurological disorders
Protocol