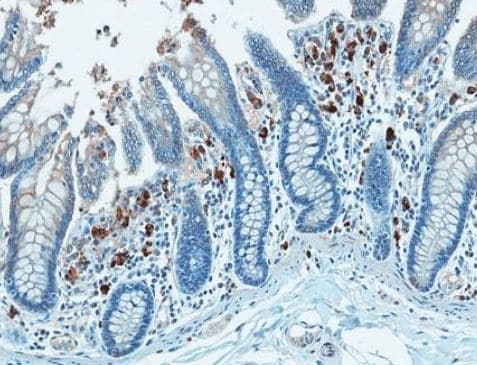 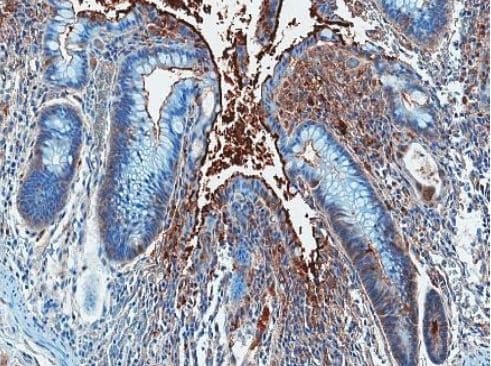 The mouse monoclonal antibody clone WN1 222-5 recognizes the core region of lipopolysaccharide (LPS), whereas it lacks reactivity with free lipid A and Rd2 or smaller LPS. LPS is a constituent of the outer membrane of the cell wall of certain types of Gram-negative bacteria, such as E. coli, Salmonella, Shigella, Pseudomonas, Neisseria, Haemophilus, and some other lesser known pathogens. The endotoxins of Gram-negative bacteria are LPS molecules with three distinct domains referred to as lipid A, core oligosaccharide and O-polysaccharide. The lipid A and core oligosaccharide comprise the endotoxin core and are relatively conserved among different Gram-negative bacterial species. The O-polysaccharides show wide structural diversity and give rise to the O-specificity of different strain and species serotypes. Lipid A is the toxic moiety of endotoxin, and is covalently linked to core oligosaccharide in all LPS. Rough (R) bacteria lack the O-polysaccharide of their smooth (S) strain bacteria counterparts, and different rough mutant bacteria have been isolated expressing a range of incomplete core oligosaccharide structures ranging from complete core (Ra) to deep-rough (Re) mutants expressing only lipid A linked to inner-core KDO residues.
During life, humans as well as other vertebrates, are often exposed to LPS, for instance by enterobacteria. While growing, enterobacteria releases small amounts of endotoxins. Predominant part of the endotoxins stay on the cell wall until the bacterium disintegrates. Endotoxins are heat stable, so even boiling the infected material for 30 minutes will not denature it. Watery diarrhea is caused by released LPS that interacts with the digestive track intestine. Cells and tissue can be destroyed by the LPS resulting in inflammation. Furthermore, LPS is a causal factor of NEC (necrotizing enterocolitis), a disorder found mostly in newborn infants. If LPS gains entry to the bloodstream, it can bind the host cells, such as macrophages. LPS responses are complicated and involve complexes of LPS-binding protein (LBP), soluble and/or membrane bound CD14 and Toll like receptor 4 ( TLR4). LBP is a serum protein that catalyzes LPS recognition by CD14. Recognition of LPS triggers a cascade of adverse systemic responses and organ failure (septic shock).

Application
Functional studies, Immuno assays, Paraffin sections, Western blot
Application Notes
W: A non-reduced sample treatment and SDS-PAGE was used (Ref. 1 and 5).
IHC-P: Antigen retrieval was performed by heating sections in 1x DIVA Decloaker reagent. As positive control gut or lymph node of SIV-infected rhesus macaques was used and as negative control gut or lymph node of non-SIV-infected rhesus macaques (Ref.6).
Use
Dilutions to be used depend on detection system applied. It is recommended that users test the reagent and determine their own optimal dilutions. The typical starting working dilution is 1:50.
Positive Control
LPS E.coli
Negative Control
Normal lymph node (non-infected)
Product type
Monoclonal antibodies
Quantity
1 mg, 5 mg, 10 mg, 20 µg, 100 µg, 500 µg
Formulation
Quantities >500 µg will be send without preservative and carrier free. Quantities <500 µg will be send with preservative and carrier. exact formulation can be found on the datasheet.
Immunogen
10E8 heat-killed bacteria
Isotype
Mouse IgG2a
Species
N/A
Alias
LPS core
Storage and stability
Product should be stored at 4 °C. Under recommended storage conditions, product is stable for at least one year. The exact expiry date is indicated on the label
Precautions
For research use only. Not for use in or on humans or animals or for diagnostics. It is the responsibility of the user to comply with all local/state and federal rules in the use of this product. Hycult Biotech is not responsible for any patent infringements that might result from the use or derivation of this product.
Disease
Infectious diseases
Protocol