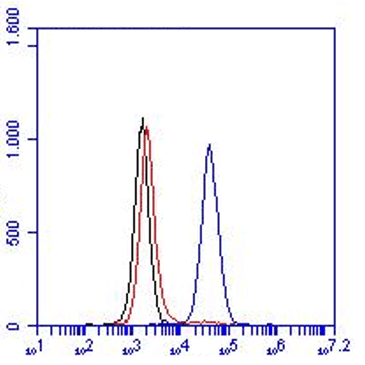 The monoclonal antibody H398 recognizes the extracellular part of the Tumor Necrosis Factor Receptor type I (TNF-RI) of the membrane-bound as well as the soluble receptor. TNF-RI (~55-60 kDa) is present on most cell types and is considered to play a prominent role in cell stimulation by TNF-alpha. TNF-alpha activates inflammatory responses, induces apoptosis, regulates cellular proliferation, and may even promote cancer progression. The effects of TNF-alpha are mediated by TNF-RI and TNF-RII, which have both distinct and overlapping downstream signaling cascades. Induction of cytotoxicity and other functions are mediated largely via TNF-RI. TNF-RI is equally well activated by both the 17 kDa soluble and 26 kDa membrane-bound form, whereas TNF-RII is efficiently activated only by the membrane bound form of TNF-alpha. TNF-RI signaling is initiated when trimeric TNF-alpha binds TNF-RI receptors. Subsequent TNF-RI trimerization promotes the recruitment of a proximal signaling complex composed of TNF Receptor Associated protein with a Death Domain (TRADD), Receptor Interacting Protein (RIP), cellular Inhibitor of Apoptosis Protein 1 (cIAP1), TNF Receptor Associated Factor 2 (TRAF2), and likely TRAF5. Studies with TNF-RI-deficient mice indicate that TNF-RI mediates most of the proliferation, pro-inflammatory, and apoptosis-activating pathways.

Application
Flow cytometry, Frozen sections, Functional studies, Immuno assays, Immuno precipitation, Western blot
Use
For immunohistology, flow cytometry and Western blotting, dilutions to be used depend on detection system applied. It is recommended that users test the reagent and determine their own optimal dilutions. The typical starting working dilution is 1:50. For functional studies, in vitro dilutions have to be optimized in user's experimental setting.
Product type
Monoclonal antibodies
Quantity
20 µg, 100 µg, 500 µg
Formulation
Quantities >500 µg will be send without preservative and carrier free. Quantities <500 µg will be send with preservative and carrier. exact formulation can be found on the datasheet.
Isotype
Mouse IgG2a
Species
Human
Cross reactivity
Rat – Yes
Alias
CD120a, Tumor necrosis factor receptor superfamily member 1A, p55/p60, TNFR-1
Storage and stability
Product should be stored at 4 °C. Under recommended storage conditions, product is stable for one year.
Precautions
For research use only. Not for use in or on humans or animals or for diagnostics. It is the responsibility of the user to comply with all local/state and federal rules in the use of this product. Hycult Biotech is not responsible for any patent infringements that might result with the use or derivation of this product.
Disease
Autoimmunity, Gastroenterology
Protocol