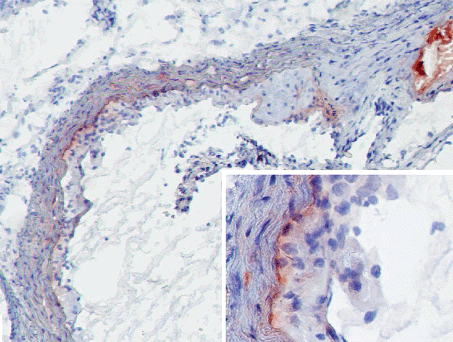 Mannose Binding Lectin (MBL), also called mannosebinding protein (MBP), is a calcium dependent oligomeric protein that belongs to the collectin family of proteins. It contains a collagen-like domain and a carbohydrate recognition domain enabling MBL to recognize carbohydrates (such as mannose and N-acetylglucosamine) on pathogens. MBL is able to activate the complement pathway independent of the classical and alternative complement activation pathways, by using attached mannose binding lectin-associated serine proteases (MASP-2) in an antibody- and C1q-independent manner. MASP-2 permits cleavage of C4 and C2 to form a C3 convertase. Once it has bound, MBL exhibits complement-dependent antibacterial activities such as microbial opsonization and/or microbial lysis via membrane attack complexes and therefore plays an important role in innate immunity.
In human, MBL is encoded by a single gene, whereas in mice there are two homologous proteins, termed MBL-A and MBL-C. The MBL-A concentration in serum is about 6-fold lower compared to that of MBL-C… MBL-A, but not MBL-C, was found to be an acute phase protein in casein and LPS-injection models. Moreover, it has been shown that MBL-A deficient mice have aberrant antigen-specific IgM responses and- suffer from increased susceptibility to infection . Note that the monoclonal antibody 8G6 is a calcium-dependent antibody.

Application
Frozen sections, Immuno assays, Immuno fluorescence, Western blot
Application Notes
W: A non-reduced sample treatment was used. The band sizes are 191, 263 and 316 kDa (Ref.1). IHC-F: Tissue sections were fixed in 4% PBS-buffered formaldehyde and pretreated with 2% hydrogen peroxide in methanol for 20 minutes at 4⁰C to quench endogenous peroxidases. Primary antibody 8g6, 2µg/ml. As negative control rat IgG2a was used (Ref.2). MBL-A (8G6) deposition in developing murine atherosclerotic lesions. Staining of frozen tissue sections with antibody 8G6 (Cat. # HM1035). Anti-mouse MBL-A at 2µg/ml (2h, RT). MBL-A was detected on the intima to media border as well as throughout the media (insert). Furthermore, extensive MBL-A deposition was seen at sites of necrosis (upper right corner).
Use
For immunohistochemistry and Western blotting, dilutions to be used depend on detection system applied. It is recommended that users test the reagent and determine their own optimal dilutions. The typical starting working dilution is 1:50.
Product type
Monoclonal antibodies
Quantity
20 µg, 100 µg
Formulation
0.2 ml (100 µg/ml) 0.2 µm filtered antibody solution in PBS, containing 0.1% bovine serum albumin and 0.02% sodium azide.
Immunogen
Purified mouse MBL-A
Isotype
Rat IgG2a
Species
Mouse
Alias
Mannose binding protein A, MBP-A, Ra-reactive factor polysaccharide-binding component p28B, RaRF p28B, MBL-1
Storage and stability
Product should be stored at 4 °C. Under recommended storage conditions, product is stable for at least one year. The exact expiry date is indicated on the label.
Precautions
For research use only. Not for use in or on humans or animals or for diagnostics. It is the responsibility of the user to comply with all local/state and federal rules in the use of this product. Hycult Biotech is not responsible for any patent infringements that might result from the use or derivation of this product.
Disease
Infectious diseases
Protocol