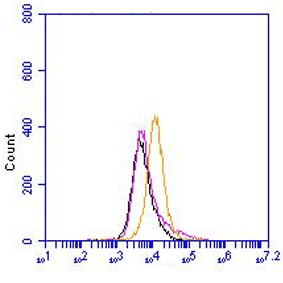 Mouse monoclonal antibody clone 3E2D10 recognizes human Von Willebrand Factor (vWF). vWF is a glycosylated protein expressed in endothelial cells (EC) and megakaryocytes. It contains multiple domains and exist as a multimer. vWF main function is to control blood hemostasis. Others functions include angiogenesis and vascular inflammation. It mediates platelet adhesion and stabilizes factor VIII. Its action is tightly regulated by ADAMTS13, which cleaves vWF at the peptide in domain A2. Majority of synthesized vWF multimers is stored in Weibel-Palade bodies of ECs or in platelets. The function of vWF is dependent on the size of the multimers. The larger the fragment, the stronger the thrombogenic capacity. Larger fragments bind more easily to circulating platelets. This underlines the importance of ADAMTS13 function. The vWF/ADAMTS13 axis is predominantly initiated under shear stress.
Von Willebrand disease (VWD) is the most common inherited bleeding disorder and is due to deficiency and/or abnormality of vWF. Measurement of vWF is key in the diagnosis of VWD. Nowadays, new roles are identified of the vWF/ADAMTS13 axis in vascular inflammation like process of leukocyte extravasation, ischemia injury, NETosis and complement activation. This implicates involvement in among others atherosclerosis, diabetes and sepsis. This make vWF an attractive biomarker in thrombinflammation.

Application
Flow cytometry, Immuno fluorescence, Paraffin sections, Western blot
Application Notes
- FC: extracellular staining domain of vWF. - W: A non-reduced sample treatment was used. The band size is ~330 kDa. - IHC-P: Staining of formalin-fixed tissues requires boiling tissue sections in 10mM Citrate Buffer, pH 6.0, for 10-20 min followed by cooling at RT for 20 minutes.
Use
Dilutions to be used depend on detection system applied. It is recommended that users test the reagent and determine their own optimal dilutions. The typical starting working dilution is 1:50.
Product type
Monoclonal antibodies
Quantity
100 µg
Formulation
0.2 µm filtered and protein G purified in PBS+0.02%NaN3+0.1%BSA
Immunogen
Amino acids 845-949
Isotype
Mouse IgG1
Species
Human
Alias
von Willebrand Factor, vWF</br> - Gene name: VWF, F8VWF
Storage and stability
Product should be stored at 4°C. Under recommended storage conditions, product is stable for at least one year.
Precautions
For research use only. Not for use in or on humans or animals or for diagnostics. It is the responsibility of the user to comply with all local/state and federal rules in the use of this product. Hycult Biotech is not responsible for any patent infringements that might result from the use or derivation of this product.
Disease
Cardiology and metabolism, Infectious diseases
CoA-TDS HM2300-HM2400