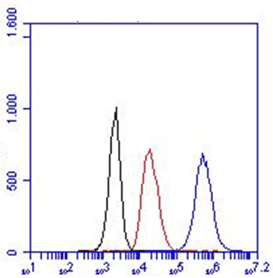 Monoclonal antibody LpMab13 recognizes Podoplanin. Podoplanin (PDPN), also known under the name Aggrus, is highly expressed in various tumors (such as oral, lung, esophageal, brain) and in normal cells as lymphatic endothelial cells and podocytes. PDPN is a small type-I membrane glycoprotein with a large number of O-glycoside chains and therefore it belongs to mucin-type proteins. It can be found on the surface of many types of normal cells originating from various germ layers. It is present primarily on the endothelium of lymphatic vessels, type I pneumocytes and glomerular podocytes. Increased levels of podoplanin or its neo-expression have been found in numerous types of human carcinomas, but it is especially common in squamous cell carcinomas, such as cervical, larynx, oral cavity, skin and lung cancer. This small sialomucin is also seen on the surface of cancer-associated fibroblasts (CAFs) in lung adenocarcinomas, as well as in breast and pancreatic tumors. In most cancers, a high level of podoplanin expression, both in cancer cells, as well as in CAFs, is correlated with an increased incidence of metastasis to lymph nodes and shorter survival time of patients. Little is known about the biological role of podoplanin, however research carried out on mice with a knock-out gene of this glycoprotein shows that the presence of podoplanin determines normal development of lungs, the lymphatic system and heart. Podoplanin on cancer cells and CAFs seems to play an important role in the development and progression of various cancers. Podoplanin possesses in its N-terminal extracellular region 3 tandem repeats of platelet aggregation-stimulating domains (PLAGs). The O-glycosylation on Thr52 of human PDPN (hPDPN) is critical for the interaction of hPDPN with C-type lectin-like receptor-2 (CLEC-2), resulting in platelet aggregation. LpMab-13 recognized endogenous hPDPN of cancer cells, including glioblastoma, oral cancer, lung cancer, and malignant mesothelioma, and normal cells such as lymphatic endothelial cells and podocytes of kidney in Western blot, flow cytometry, and immunohistochemistry. LpMab-13 specificially binds to PLAG2/3, and recognized glycan-deficient hPDPN in flow cytometry, indicating that the interaction between LpMab-13 and hPDPN is independent of its glycosylation. The minimum epitope of LpMab-13 was identified as Ala42–Asp49 of hPDPN using Western blot and flow cytometry. LpMab-13 might serve to study hPDPN function.

Application
Flow cytometry, Immuno assays, Immuno fluorescence, Paraffin sections, Western blot
Application Notes
IA: Antibody LpMab13 can be used as detection antibody
. FC: HM2374 can be used both intra- and extracellular.
W: reduced and non-reduced conditions were used. The expected band sizes are ~40 kDa.
Product type
Monoclonal antibodies
Quantity
20 µg, 100 µg
Formulation
0.2 ml (100 µg/ml) 0.2 µm filtered protein G purified antibody solution in PBS, containing 0.1% bovine serum albumin and 0.02 % sodium azide.
Immunogen
LN229/hPDPN (Ref.1 and Ref.2)
Isotype
Mouse IgG1
Species
Human
Alias
Aggrus, Glycoprotein 36, Gp36, PA2.26 antigen, T1-alpha, T1A
Storage and stability
Product should be stored at 4°C. Under recommended storage conditions, product is stable for at least one year.
Precautions
For research use only. Not for use in or on humans or animals or for diagnostics. It is the responsibility of the user to comply with all local/state and federal rules in the use of this product. Hycult Biotech is not responsible for any patent infringements that might result from the use or derivation of this product.
CoA-TDS HM2300-HM2400