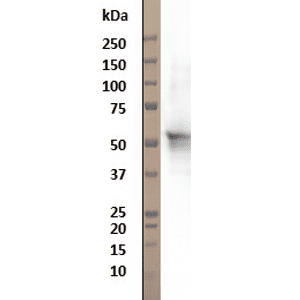 The goat polyclonal antibody recognizes human alpha-1-antitrypsin. This protein is a member of the serine protease inhibitor (serpin) superfamily which are proteins known for their ability to inhibit proteases. It is the most abundant circulating protease inhibitor known. It mainly targets enzymes released by neutrophils, especially neutrophil elastase (NE) but also proteinase 3 (PR3) and Cathepsin G (CG). Serpinopathies are conformational diseases characterized by the polymerization and intracellular retention of members of the serpin superfamily. The best known is alpha-1 antitrypsin deficiency, with the most common severe deficiency allele being the Z mutation (Glu342Lys). This severe autosomal dominant disorder causes the protein to undergo a conformational transition and form ordered polymers that are retained within hepatocytes. Due to this accumulation of polymers in hepatocytes, blood alpha-1 trypsin levels will decrease leading to chronic uninhibited tissue breakdown. This causes the degradation especially of lung tissue which will eventually lead to pulmonary emphysema. In addition, accumulation of polymers in hepatocytes causes liver diseases such as neonatal hepatitis, cirrhosis, and hepatocellular carcinoma.

Application
Immuno assays, Western blot
Application Notes
- IA: Polyclonal antibody HP9063 can be used as detection antibody. - W: A reduced sample treatment and SDS-Page was used. The band size is ~60 kDa
Use
Dilutions to be used depend on detection system applied. It is recommended that users test the reagent and determine their own optimal dilutions.
Product type
Polyclonal antibodies
Quantity
20 µg, 100 µg
Formulation
0.2 ml (100 μg/ml) 0.2 µm filtered and protein G purified in PBS+0.1%BSA+0.02%NaN3
Immunogen
Monomeric Z AAT purified from donor plasma
Isotype
Goat Ig
Species
Human
Alias
Alpha-1 protease inhibitor, Alpha-1-antiproteinase, Serpin A1</br> - Gene name: SERPINA1, AAT, PI
Storage and stability
Product should be stored at 4°C. Under recommended storage conditions, product is stable for at least one year.
Precautions
For research use only. Not for use in or on humans or animals or for diagnostics. It is the responsibility of the user to comply with all local/state and federal rules in the use of this product. Hycult Biotech is not responsible for any patent infringements that might result from the use or derivation of this product.
Disease
Autoimmunity, Pulmonology
CoA-TDS pAb