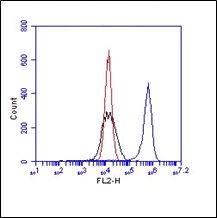 The monoclonal antibody BV7 recognizes human ß1-integrin. Beta-1 integrin is a ubiquitously
expressed ~89 kDa type I transmembrane protein functioning as receptor when heterodimerized with
one alpha subunit. It belongs to the integrin beta chain family consisting of four different genes,
encoding multiple β-integrins via alternative splicing. Ligand-recognition depends on the composition
of the heterodimer: either collagen, fibronectin, VCAM1, laminin, cytotactin, osteopontin, epiligrin,
thrombospondin and CSPG4 can bind to the integrin-complex. Beta-1 integrins recognize the
sequence R-G-D in a wide array of ligands. Isoform beta-1B interferes with isoform beta-1A resulting
in a dominant negative effect on cell adhesion and migration (in vitro). In case of HIV-1 infection, the
interaction with extracellular viral Tat protein seems to enhance angiogenesis in Kaposi’s sarcoma
lesions. When associated with α7, β1-integrin regulates cell adhesion and laminin matrix deposition.
BV7 is active on HT-29 colon carcinoma cells and on HCCP-2998 tumor cells. It is involved in
promoting endothelial cell motility and angiogenesis. Furthermore, β1-integrin plays a mechanistic
adhesive role during telophase, and is required for the successful completion of cytokinesis.
Upon activation integrins in general, including β1-integrin, are known to exhibit global structural
rearrangements and exposure of ligand binding sites. β1-integrin modulation is of importance in tissue
repair and regeneration. In cultured primary hippocampal neurons, astrocytes and tissues, cell surface
expression of amyloid beta fibrils (key hallmark of Alzheimer’s disease) selectively co-localized with
β1-integrin. Preincubation of cells with antibodies against β1-integrin, as well as α1-integrin, greatly
enhanced amyloid beta-induced apoptosis, indicating a protective role for integrins in apoptosis.
The monoclonal antibody BV7 does not recognize α5β1 complex and not the cytoplasmic part of the
β1-subunit. Monoclonal antibody BV7 is active on HT-29 colon carcinoma cells and on HCCP-2998
tumor cells. BV7 binds to several other tumor cells (MG3 osteosarcoma, A375 melanoma, MHCC-
1410 and Lovo colon carcinoma) but does not affect adhesion to endothelial cells.

Application
Flow cytometry, Functional studies, Immuno assays, Immuno precipitation, Western blot
Application Notes
FC: Antibody BV7 stains the extracellular domain of beta-1 integrin. HUVEC cells were fixed in 4% paraformaldehyde before staining. Mouse IgG1 isotype was used as negative.
FS: Antibody BV7 functions as an inhibiting antibody. The antibody was functionally tested by adhesion assay (ref 1), chemotaxis (ref 2), patch clamp analysis (ref 3) and neurotoxicity induced apoptosis (ref 4).
Use
For flow cytometry and Western blotting dilutions to be used depend on detection system applied. It is recommended that users test the reagent and determine their own optimal dilutions. The typical starting working dilution is 1:50. For neutralization of biological activity in vitro dilutions have to be made according to the amounts of beta1 integrin to be inactivated.
Positive Control
HT-29 colon carcinoma, Endothelial cells
Product type
Monoclonal antibodies
Quantity
20 µg, 100 µg
Formulation
0.2 ml (100 µg/ml) 0.2 µm filtered antibody solution in PBS, containing 0.1% bovine serum albumin.
Immunogen
Human umbilical vein EC
Isotype
Mouse IgG1
Species
Human
Alias
CD29, fibronectin receptor subunit beta,-integrin VLA-4 subunit beta
Storage and stability
Product should be stored at 4 °C. Under recommended storage conditions, product is stable for one year.
Precautions
For research use only. Not for use in or on humans or animals or for diagnostics. It is the responsibility of the user to comply with all local/state and federal rules in the use of this product. Hycult Biotech is not responsible for any patent infringements that might result from the use or derivation of this product.
Disease
Autoimmunity, Neurological disorders
Protocol