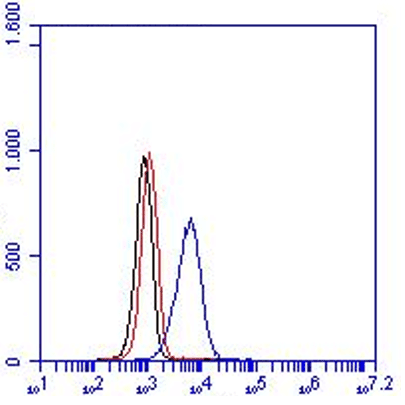 The monoclonal antibody 60.11 recognizes a cell membrane C1q binding molecule that recognises the
globular heads of C1q. It is also present in plasma and the extracellular matrix. The molecule is an
unusually acidic, single chain protein with an apparent molecular weight of 33 kDa. It does not possess
a conventional sequence motif compatible with a membrane spanning segment nor a consensus site for
a GPI anchor. gC1q-R migrates as a single chain under both reducing and non-reducing conditions, but
it behaves as an oligomer on gel-filtration in non-dissociating conditions. Its multimer formation may be
a critical process by which the gC1q-R molecule increases its affinity for multivalent ligands such as
C1q.
gC1q-R has been shown to inhibit complement activation by preventing the binding of C1q to
antibodies, suggesting that the binding site for gC1q-R and the binding site for immune complexes,
which are present on the C1q globular ‘heads’, may be located at the same position. gC1q-R is capable
of interacting with several proteins involved in blood clotting, namely, thrombin, prothrombin, the
heparinbinding form of vitronectin, the ternary complex, vitronectin-thrombin-antithrombin, as well as
high-molecular-weight kininogen and Hageman factor. Besides its role in the complement pathway,
gC1q-R participates in enhancement of Fc-receptor and CR1-mediated phagocytosis, procoagulant
activity on platelets, and chemotactic activity on mast cells, eosinophils, neutrophils, and fibroblasts.
gC1q-R is expressed on a wide variety of cells and can serve as a binding site for plasma and microbial
proteins. Its antigenic sites may be cryptic on cells in suspension but become exposed when the cells
are fixed by bifunctional cross-linkers. Probably it is also expressed on the cell membrane as a tetramer.
Crosslinking or activation may thus bring about a tetrameric assembly of gC1q-R followed by a
conformational change within the molecule, thereby exposing epitopes which are otherwise hidden. A
form of GC1q-R is also found inside the cell. Intracellular gC1q-R has been shown to bind the
cytoplasmic tail of the α1B-adrenergic receptor and to PKCμ.
The monoclonal antibody 60.11 is directed against epitopes situated within the NH2-terminal stretch of
gC1q-R corresponding to residues 76-93. Clone 60.11 recognizes the putative C1q binding site and
reacts with the mature form, but has poor or no reactivity with the truncated form, lacking residues 74-
95.

Application
Flow cytometry, Functional studies, Immuno assays, Immuno precipitation, Paraffin sections, Western blot
Use
For flow cytometry and Western blotting, dilutions to be used depend on detection system applied. It is recommended that users test the reagent and determine their own optimal dilutions. The typical starting working dilution is 1:50. For functional studies, in vitro dilutions have to be optimized in user's experimental setting.
Product type
Monoclonal antibodies
Quantity
20 µg, 100 µg
Formulation
0.2 ml (100 µg/ml) 0.2 µm filtered antibody solution in PBS, containing 0.1% bovine serum albumin.
Immunogen
Recombinant-gC1q-R corresponding to mature gC1q-R (amino acids 74-282)
Isotype
Mouse IgG1
Species
Human
Cross reactivity
Rat – Yes, Syrian hamster – Yes
Alias
Glycoprotein gC1qBP, GC1q-R protein, hyaluronan-binding protein 1, mitochondrial matrix protein p32, p33
Storage and stability
Product should be stored at 4 °C. Under recommended storage conditions, product is stable for one year.
Precautions
For research use only. Not for use in or on humans or animals or for diagnostics. It is the responsibility of the user to comply with all local/state and federal rules in the use of this product. Hycult Biotech is not responsible for any patent infringements that might result from the use or derivation of this product.
Disease
Cardiology and metabolism, Tumor immunology
Protocol