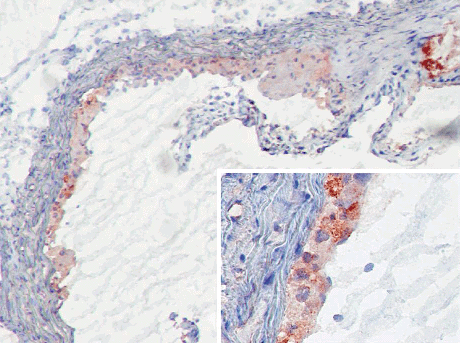 Mannose binding lectin (MBL), also called mannose- or mannan-binding protein (MBP), is a member of the group of collectins. MBL is an important pattern-recognition receptor in the innate immune system. The protein mediates innate immune responses, such as activation of the complement lectin pathway and phagocytosis, to help fight infections. MBL is an oligomeric lectin that recognizes carbohydrates as mannose and N-acetylglucosamine on pathogens. MBL contains a cysteine rich, a collagen like and a carbohydrate recognition domain. Binding of MBL leads to the activation of MBL-associated serine proteases (MASP’s). Activated MASP-2 cleaves C4 and C2 in a similar way as C1s do for the classical pathway (CP) leading to the formation of C4b2a, cleavage of the classical pathway convertase C3, and eventually complement activation up to the formation of the membrane attack complex. MBL is able to activate the complement pathway independent of the classical and alternative complement activation pathways.
MBL is predominantly synthesized by hepatocytes and has been isolated from the liver or serum of several vertebrate species. Only one form of human MBL has been characterized, while two forms are found in rhesus monkeys, rabbits, rats and mice. The mouse forms are known as MBL-A and MBL-C.
The MBL-C concentrations in serum are about 6-fold compared to that of MBL-A. MBL-A, but not MBL-C, was found to be an acute phase protein in casein and LPS-injection models. MBL-C exists in higher oligomeric forms than MBL-A. The monoclonal antibody 14D12 is a calcium-dependent antibody.
.

Application
Frozen sections, Immuno assays, Immuno fluorescence, Western blot
Application Notes
F: Cryostat sections (7 µm) of mouse tissue were acetone fixed and stained o/n at 4 °C in TBS/2% goat serum. (Ref.4)
IA: Biotinylated 14D12 was used as detector in ELISA at 1 µg/ml TBS/Tween-20/Ca (Ref.1)
IF: Hyphae of C. albicans were fixed on poly-l-lysin coated slides with ice-cold aceton. Slides were incubated for 1h at RT with 14D12. (Ref.3)
W: On a 12% non-reducing SDS-PAGE a prominent band of ca. 50Kda is detected. Under reducing conditions a 26 KDa band is detected. (Ref.2)
MBL-C (clone 14D12) deposition in developing murine atherosclerotic lesions following 10 weeks of high fat feeding. MBL-C was detected in and around invading macrophages invading the intima (insert). MBL-C bound, similar to MBL-A, at sites of necrosis (upper right corner). No MBL-C binding was shown in the media or on fibrous caps covering the thickened intima.
Use
For immuno histology and Western blotting dilutions to be used depend on detection system applied. It is recommended that users test the reagent and determine their own optimal dilutions. The typical starting working dilution is 1:10. It is recommended that solutions with a calcium concentration of 1 mM are used (14D12 is a calcium-dependent antibody).
Positive Control
Mouse Serum and kidney tissue
Product type
Monoclonal antibodies
Quantity
20 µg, 100 µg
Formulation
0.2 ml (100 µg/ml) 0.2 µm filtered antibody solution in PBS, containing 0.02% sodium azide and 0.1% bovine serum albumin.
Immunogen
Purified MBL-C
Isotype
Rat IgG2a
Species
Mouse
Alias
MBL, L-MB, MBL-C, MBP-C, Mbl2
Storage and stability
Product should be stored at 4 °C. Under recommended storage conditions, product is stable for one year.
Precautions
For research use only. Not for use in or on humans or animals or for diagnostics. It is the responsibility of the user to comply with all local/state and Federal rules in the use of this product. Hycult Biotech is not responsible for any patent infringements that might result with the use of or derivation of this product.
Disease
Autoimmunity, Gastroenterology
Protocol