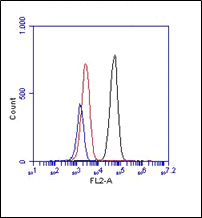 The monoclonal antibody T2.5 recognizes human Toll-like receptor 2 (TLR2). Toll-like receptors (TLR) are highly conserved throughout evolution and have been implicated in the innate defense to many pathogens. At present, ligands for several of the TLR’s, such as TLR2-6,9, have been identified, confirming their role in first line defense against invading microorganism. In mammals, TLRs are identified as type I transmembrane signaling receptors with an extracellular portion containing leucine-rich repeats with pattern recognition capabilities. Pathogen recognition by TLRs provokes rapid activation of innate immunity by inducing proliferation of proinflammatory cytokines and upregulation of costimulatory molecules and eventually toinitiation of adaptive immunity. TLR2 has been identified as a receptor that is central to the innate immune response to lipoproteins of Gram-negative bacteria, several whole Gram-positive bacteria, as well as a receptor for peptidoglycan and lipoteichoic acid and other bacterial cell membrane products. It is suggested that TLR2 is able to recognize such a wide variety of PAMPs (pathogen-specific molecular patterns) by forming heterodimers with other TLRs like e.g. TLR6. TLR2 is essential for recognizing lipopeptides and lipoproteins from several microorganisms and also peptidoglycans derived from gram-positive bacteria. Bacterial species as diverse as mycobacteria, spirochetes, mycoplasma, Staphylococcus aureus, and Streptococcus pneumoniae have all been shown to mediate cellular activation via TLR2.

Application
Flow cytometry, Frozen sections, Functional studies, Immuno assays, Immuno fluorescence, Immuno precipitation
Application Notes
IHC-F: 6µm sections were fixed with aceton. Sections were blocked with goat serum and exposed o/n with T2.5.
FC: 4*104 leukocytes/ml were stained for 30 minutes at 4°C.
FS: mice were injected i.p. with 1 mg T2.5, after 1h incubation mice were challenged;T2.5 5µg/ml was added to cell culture.
IP: 40 µg cleared protein was incubated with 2 µg T2.5 for 1h at 4°C.
IA: T2.5 as a detector.
Use
Dilutions to be used depend on detection system applied. It is recommended that users test the reagent and determine their own optimal dilutions. The typical starting working dilution is 1:50. For functional studies, in vitro dilutions have to be optimized in user’s experimental setting.
Positive Control
RAW264.7 cells
Negative Control
CHO cells
Product type
Monoclonal antibodies
Quantity
1 mg, 5 mg, 10 mg, 50 mg, 100 mg, 20 µg, 100 µg, 500 µg
Formulation
Quantities >500 µg will be send without preservative and carrier free. Quantities <500 µg will be send with preservative and carrier. exact formulation can be found on the datasheet.
Immunogen
Mouse TLR2 peptide
Isotype
Mouse IgG1
Species
Human/Mouse
Cross reactivity
Human – Yes
Alias
TLR2, CD282, TIL4</br> - Gene name: Tlr2
Storage and stability
Product should be stored at 4 °C. Under recommended storage conditions, product is stable for one year.
Precautions
For research use only. Not for use in or on humans or animals or for diagnostics. It is the responsibility of the user to comply with all local/state and federal rules in the use of this product. Hycult Biotech is not responsible for any patent infringements that might result from the use or derivation of this product.
Disease
Infectious diseases
CoA-TDS HM1000-HM1066