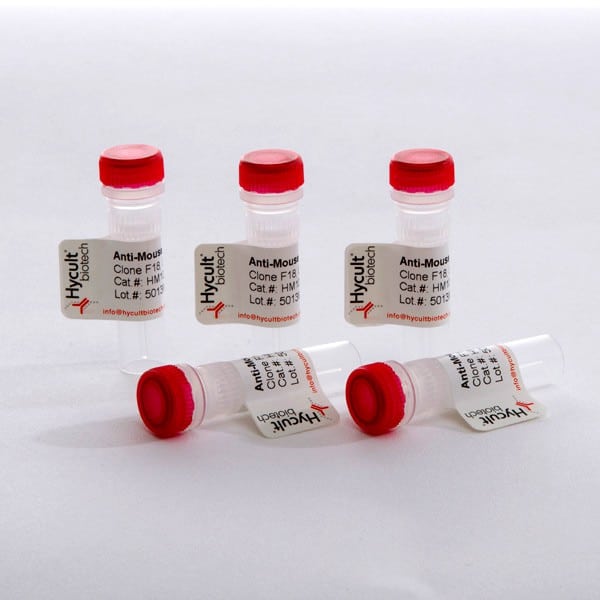 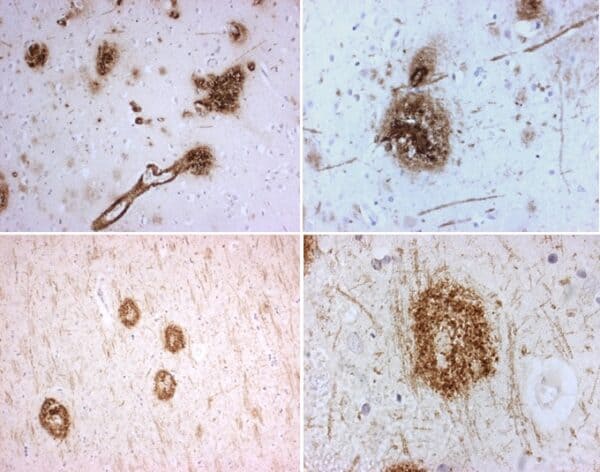 Antibody clone VU17, formerly known as αVU Aß 17, recognizes the N-terminus of human amyloid beta (i.e. in: Aβ1-38; Aβ1-39; Aβ1-40; Aβ1-42). Alzheimer disease (AD) is the most common form of dementia, and is characterized by the intra neuronal accumulation of the microtubule-associated protein tau (MAPT), and by extracellular deposits of amyloid beta (Aß) in the brain parenchyma. Aß deposits have different appearances, ranging from loosely organized to dense-cored, deposits, also called plaques, as well as deposits in the walls of small blood vessels.
The Aβ peptides are a proteolytic cleavage product of the membrane bound amyloid precursor protein (APP), upon cleavage by APP-cleaving enzyme 1 (BACE1) and the γ-secretase complex. There are multiple cleavage sites in Aβ domain leading to various fragments of 36-43 amino acids in length. Aβ is produced by various cell types and is secreted into the interstitial fluid.
Aß peptides are readily detectable in cerebrospinal fuid (CSF). Aβ terminating at residue 40 (Aβ40) being approximately 10 times more abundant than Aβ42. Whereas Aβ40 levels are unchanged in AD compared to control cases, Aβ42 levels in CSF are reduced. Therefore, Aβ42 levels and the Aβ42: Aβ40 ratio in CSF are of diagnostic importance.
Assessment of Aβ levels and co-localization of Aβ with other factors and specific cell types in brain tissue is essential for investigating the molecular mechanisms underlying AD. Antibody VU17 detects all forms of Aβ deposits without the need for formic acid pre-treatment on paraffin sections and can be applied in a double staining strategy, making it suitable for investigating co-localization. Antibody VU17 is raised against synthetic Aβ1-17, and detects a region within the first six amino acids of the N-terminus of Aβ.

Application
Frozen sections, Immuno assays, Immuno precipitation, Paraffin sections, Western blot
Application Notes
IA: Antibody VU-17 can be used as capture and detection antibody. IHC-P: VU17 immunostainings of paraffin sections (4% Paraformaldehyde fixed) gives good results upon formic acid pre-treatment. However, antigen retrieval (autoclave; 10 min.) using either 10mM sodium citrate buffer (pH 6.0) or 10 mM Tris buffer, containing 1 mM EDTA (pH 9.0), is superior and allows the use of VU17 for double stainings in combination of antibodies specific for formic acid sensitive epitopes (Ref 1).
Use
Dilutions to be used depend on detection system applied. It is recommended that users test the reagent and determine their own optimal dilutions. The typical starting working dilution is 1:50.
Product type
Monoclonal antibodies
Quantity
20 µg, 100 µg
Formulation
0.2 ml (100 μg/ml) 0.2 μm protein G purified antibody solution in PBS, containing 0.1% bovine serum albumin and 0.02% sodium azide.
Immunogen
Synthetic peptide corresponding to Ab1-17
Isotype
Mouse IgG2a
Species
Human
Alias
Abeta, Aβ, β-Amyloid
Storage and stability
Product should be stored at 4°C. Under recommended storage conditions, product is stable for at least one year.
Precautions
For research use only. Not for use in or on humans or animals or for diagnostics. It is the responsibility of the user to comply with all local/state and federal rules in the use of this product. Hycult Biotech is not responsible for any patent infringements that might result from the use or derivation of this product.
Disease
Cardiology and metabolism, Neurological disorders
CoA-TDS HM2300-HM2400